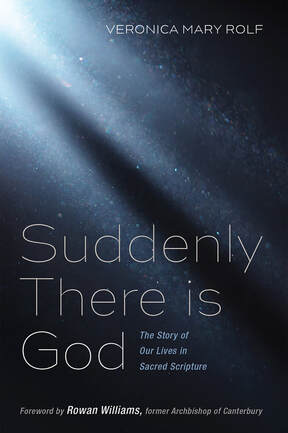 Recently Published by Wipf and Stock:
Suddenly There is God:
The Story of Our Lives in Sacred Scripture
by Veronica Mary Rolf (Cascade Books Imprint, Fall 2019)
with a Foreword by Rowan Williams, former Archbishop of Canterbury

Suddenly There is God plunges you into the key stories of biblical characters who find themselves caught up in the divine-human drama. Then it relates these stories directly to the distinct stage of your own lives; being created, falling from grace, leaving the safety (or confinement) of your childhood ark, hearing God’s call, gaining your freedom, embracing covenant, praying the psalm in times of joy and sorrow, learning forgiveness, choosing divine and human love, and expecting resurrection. The scenes will unfold before your eyes like a riveting play or film as you discover with astonishment how closely the progression of Old and New Testament stories reflects your own spiritual journey.

Packed with historical content and written with dramatic intensity, Suddenly There is God also suggests contemplative ways for you to nurture an “ardent expectation” of encountering God. By identifying with the biblical characters—their conflicts, difficult choices, and sudden realizations—you may recognize how divine presence continually “breaks in” to your own life story. This book will be a valuable resource for clergy, students, and spiritual seekers of all ages who long to experience the drama of sacred Scripture as deeply personal revelation.

Praise for Suddenly There is God:
“Veronica Mary Rolf has written a series of beautifully clear and direct meditations on how the biblical story traces our own developmental history and invites us to understand ourselves more deeply by reading ourselves into the text and the text into ourselves.”
— from the Foreword by Rowan Williams, former Archbishop of Canterbury

“Suddenly There is God is deeply scholarly, deeply accessible, deeply faithful, deeply scriptural, deeply poetic, deeply personal, deeply integrated, deeply readable, deeply converting, deeply catholic, and deeply connecting. For thirty years I have been selecting and forming people for ordination; if all they did was to read and digest this soigné book, their ministry and spirituality would be remarkable, and their sermons absolutely stunning!”
—David Wilbourne, Honorary Assistant Bishop of York
​
“Martin Buber said that the Bible is not a theology for us but an anthropology for God. With insightful interpretation of the texts, Veronica Mary Rolf shows us that it is an anthropology for us as well, revealing how God deals with humanity, from biblical characters to our own lives.”
—Carolyn Osiek, RSCJ, Fischer Professor of New Testament, Emerita, Brite Divinity School

“Good literature introduces you to yourself. These insightful reflections do just that. Clear and compassionate. This book belongs on your coffee table where your friends and your children can chance upon it.
Veronica Mary Rolf is a trustworthy mentor.”
—Ronald Rolheiser, OMI, President, Oblate School of Theology, San Antonio, Texas, and author of The Holy Longing
To Order from Wipf and Stock Publishers @ 20% Discount
To Order From Contemplative Life Online Bookstore
To Order from Amazon
"In this exquisite book, scholar of medieval studies Rolf (Julian’s Gospel) introduces medieval mystic and Christian theologian Julian of Norwich in all her astonishing brightness. . . . Rolf plumbs Julian’s spiritual audacity in this must-read for those interested in medieval Christianity and literature." Starred Review in Publishers Weekly, 4/9/18:

"The grand and optimistic vision of Lady Julian is fully presented and profoundly supported in this excellent guide by Veronica Mary Rolf. I have been fed for many years by Julian, but this is a new and generous feeding. It can serve as a first-time introduction to this marvelous mystic or a fifth-time deeper journey." Richard Rohr, OFM, Center for Action & Contemplation 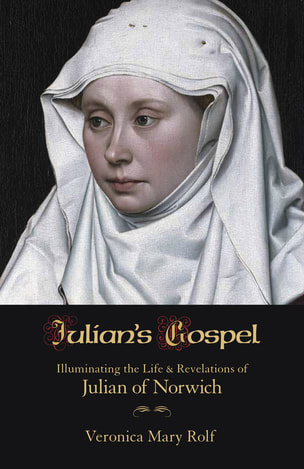 First Place Winner of THE CATHOLIC BOOK AWARD (The Catholic Press Association) First Place Winner of the NATIONAL INDIE "EXCELLENCE" AWARD for Religion
NAUTILUS GOLD MEDAL BOOK AWARD for Religion/Spirituality
EXCELLENCE IN PUBLISHING AWARD for Biography from The Association of Catholic Publishers
Julian's Gospel: Illuminating the Life & Revelations of Julian of Norwich (Orbis Books, 2013)
Julian's Gospel is an award-winning  study of the Life and Revelations of Julian of Norwich, the beloved and  highly influential fourteenth century  Christian mystic. This is the first book to combine a detailed historical reconstruction of Julian's life in medieval Norwich with a comprehensive commentary on her Revelations in a new and faithful translation from the Middle English. Unlike other brief summaries of Julian's life and times, this book goes in-depth to uncover the political, cultural, social, and religious milieu that formed and deeply influenced her development as a woman and a mystic. Also unlike other textual companions to Julian's work that provide only short explanations of Middle English words, or merely footnote theological terms, this work gives the reader a detailed analysis of her writings, illuminating her ground-breaking mystical theology with extensive scholarship. Throughout, the book creates a strong dramatic arc for Julian's Revelations that interweaves her personal sufferings and burning questions with her visionary experiences, producing a compelling spiritual biography.

"It is possible that Veronica Mary Rolf’s book will become the definitive work on Julian of Norwich. Her book is a masterpiece of scholarly historical research and amazing theological insight into Julian’s Revelations, one of the classics of medieval spirituality." Catholic Library World Quarterly

Certainly one of the best books on Julian of Norwich I’ve ever read. With a vast amount of research and a great deal of passion, Veronica Mary Rolf successfully recreates the world of the great mystic, provides careful explanations of Julian’s rich experiences in prayer, and, overall, paints a convincing portrait of one of the most remarkable women ever to have lived—and believed." James Martin, SJ, best-selling author of numerous books, including: "Jesus: A Pilgrimage."

Julian's Revelations take on a deeper personal nature and relevance when viewed through Rolf's historical, familial, and theological insights. The author deftly portrays a Julian of her time but for all time -- a voice that speaks to 21st century people with profound wisdom, faithful to Church teaching yet always plumbing its depths." Catholic Press Association First Place Award Citation.

"Writing [the book] was clearly a labor of love on the author's part, and as Julian's final chapter quite simply declares that "love is our lord's meaning" throughout the entire course of the revelations, so the book becomes an extended invitation to the audience to participate not only in the author's clearly evident love for Julian but in the divine love that Julian herself receives and reciprocates and conveys by her revelations "to a people who needed the most" -- because, as the author suggests in her closing words, 'we are that people.'" Catholic Books Review

[T]he prizes that her volume has garnered to date indicate that it has already been well-received as a popular introduction to the medieval anchoress and her work. That a new book about Julian should find such an audience speaks to the continuing capacity of her writings to reassure her readers that “al shal be wel, and al shal be wel, and al manner of thyng shal be wele.”
​London Times Literary Supplement

Click Here for more information about Julian of Norwich